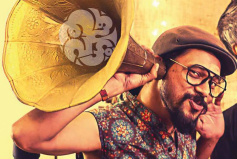 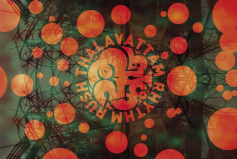 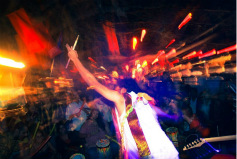 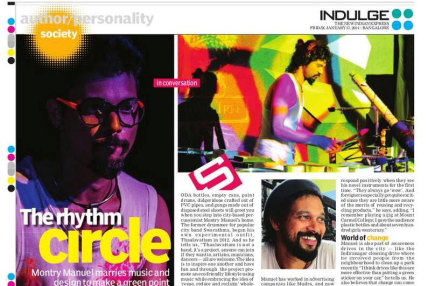 "I would advice people to be more considerate about their surroundings. There are very basic steps that need to be taken for an eco-friendly living. Keep the city clean, you have to take the call. You can’t blame everything on government. Be creative and spread love."

Thalavattam (Also known as Rhythm Rush), a Bangalore based outfit, have their own ethic working here; Manuel Montry’s initiative is to further the beaten-to-death concept of the three R’s (Namely, reuse, reduce and recycle) into the functioning of our everyday lives. It’s a noble agenda. The idea is simply this: ‘Thalavattam’ literally translates as ‘Circle of Rhythm’ in Malayalam, which is to say that the band, apart from its own performances on stage, requires the participation of their audience as well for the show to go on. The use of instruments such as the Djembe, much like Naadro, and the Didgeridoo (native to Australian Aborigines), is a strong suggestion at the universality of music, much like the undisputable fact of the existence of nature, intrinsic to all things living.

“As a creative person, one needs to be responsible too. One day, a while back, during my Swarathma days, I was walking down the street and I saw a pile of empty Pepsi bottles, picked one up and found it to be strong, sturdy, useful. Ever since, my fascination with odd objects has grown and I’ve made drums out of them. Usually, during our performances we distribute them among our audience. They range from PVC pipes to paint cans, each of which have very distinct sounds as various companies package their products differently. I don’t prefer to talk about it much. There are other ways in which Thaalavattam takes up the environment issue. For instance, I’ve been around town to random tailors, looking for waste cloth, collected that material, given it to working class women, gotten them involved and paid them for it. The idea is to get them involved; their handiwork, we used as merchandise for the band. People knew what it was, people knew what our drums are about, people know what we are about. I prefer not to surround it in a smokescreen of words.”

WATCH VIDEO: Accidental by Thaalavattam and Singas Project - Montry Thaalavattam: The sound of trash with acoustic flavour of jazz