Mika teaches regular group and private classes in Paris and holds retreats around the world. His wise and playful retreats in Ulpotha since 2007 are extremely popular, so be sure to book early. Mika started yoga at aged 21 with Baptiste Marceau, one of France's foremost Astanga teachers, who was later to become a good friend and mentor. Mika was a musician at that time, though yoga had such a pull for him that he left Paris a year and a half later to concentrate on teaching. In 2002 he met a swami in India who offered to teach him tantric yoga. For the next 3 years he traveled between Paris and Rishikesh in India. Many people were asking for private classes, so he started to travel the world, from New York to Morocco to Mongolia to give classes and retreats! In 2010, he created YOGALAB with Marco Prince, creating sound-immersed yoga for events around the world and in 2012 became part of TOUT ÇA POUR ÇA, promoting Yoga, Musisc, Vegan Food & Sustainable Experiences. 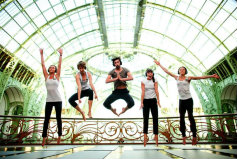 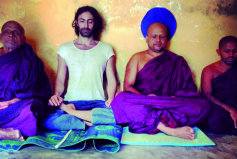 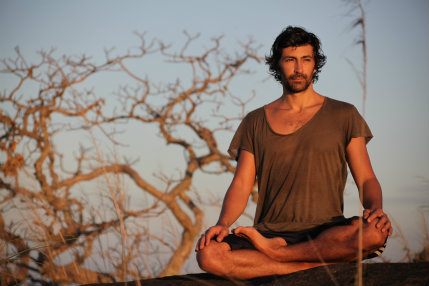 PARISIEN WITH SOUL OF WORLD INHABITANT

Mika started yoga at aged 21 with Baptiste Marceau, one of France's foremost Astanga teachers. He was a musician at that time, though yoga had such a pull for him that he left Paris to concentrate on teaching. He started to travel the world, from New York to Morocco to Mongolia to give classes and retreats.

Mika De Brito started as a musician and continues to be involved in music, his speciality is the hang drum. He has practiced yoga for more than eighteen years. In 1997 Mika began training in Asthanga Yoga with Baptiste Marceau (Who was trained by both Danny Paradise and David Williams ) a recognised master now living in Latin America. He trained daily for two years in the home of Baptiste’s father Marcel Marceau the great mime.

In 2002 Mika met Swami Arunfrom Rishikesh with whom he opened together “PARISYOGA” on Champs-Elysées. He spent three years with him in between Paris and Rishikesh, India, experimenting the yogic life into the cave of his master in Gangotree. After three years fully exposed to the phenomenon of the Hindu guru culture, Mika returned to Paris with his own direction, his own voice.

His popularity as a yoga teacher grew as did his clientele list. Shakespearean play director Peter Brook offered Mika the opportunity to teach actors, Mario Testino the photographer, Christina Oiticica and her husband the writer Paulo Coehlo (The Alchemist). He has been for seven years now the yoga teacher of the highest members of the Royal Familly of Morroco.

Hours of movement for one second of immobility... serene, happy... nothing happend... yoga begin at the end of the practice! (Mika always says "We did it!"...all for that which means TOUT ÇA POUR ÇA!:).