Ulpotha has been a retreat site for thousands of years and remains a perfect place for a Yoga holiday or an Ayurveda retreat in the heart of Sri Lanka. It's a beautiful hide-away open to guests for holidays and retreats for part of the year and is a place of total peace. You may come here to experience Yoga holidays and Ayurveda retreats and the warm, generous and gentle hospitality the people of Sri Lanka love to offer. 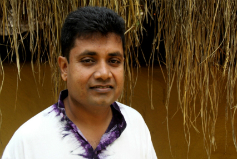 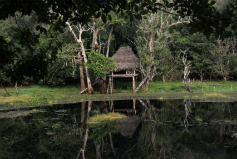 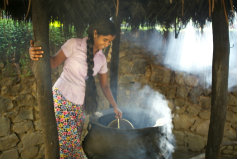 ULPOTHA IS THERE TO BE ENJOYED AS ONE 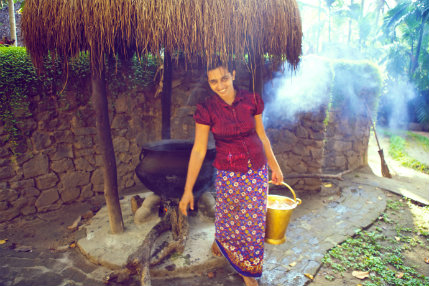 Ayurveda clinic - Sanasuma Veda Asapuwa was designed to provide free consultations and medication for the local population, has already treated nearly 10,000 villagers from the surrounding areas and received nearly 31,000 visits.

On August 28th, 2006, on the birthday of one of the founders of Ulpotha, the late Mudiyanse Tennekoon, a new Ayurveda clinic called the Sanasuma Veda Asapuwa was dedicated to his memory and opened in Ulpotha.Now, nearly eight years later, this clinic designed to provide free consultations and medication for the local population, has already treated nearly 10,000 villagers from the surrounding areas and received nearly 31,000 visits. Here is the story of its beginnings as told by Ulpotha's resident Ayurveda doctor, Srilal Mudunkothge.

In December 2004, just before the Tsunami hit Sri Lanka, I met Viren Perera and Giles Scott in Colombo and they told me about their place in central Sri Lanka and proposed that I join them. In addition to running the Wedegedera, where guests staying at Ulpotha receive Ayurvedic Panchakarma treatments, Viren and I decided that it would be appropriate for Ulpotha to offer free Ayurveda medical care to the surrounding villages, and to fund this initiative through the treatments given to Ulpotha guests.

So in June 2005 we first began by receiving patients in the Ulpotha Wedegedera, while at the same time launching the construction of the free clinic located at the entrance to Ulpotha, not far from the main road. Word of mouth spread so rapidly that by the time the Sanasuma Veda Asapuwa was officially opened at the end of August 2006, I was treating on average of 50 to 60 patients per day.

The clinic is open three days a week from 8am to 5pm on a first-come, first-served basis. It is now so popular that, on some mornings, the first patients begin queuing for their entrance number as early as 4am and the 50 patient limit is reached by 7am. On most days in the busy season (when the farmers have planted their paddies and before they begin the harvest) there are up to 90 people waiting for me when I arrive at 8am and I have to turn some of them away.

However, in such instances, I always manage to find time to consult those who have come from afar. Each patient is given a personal number, which enables me to keep records of the history of their ailments. The majority of ailments I treat are those caused by an imbalance of Vata, due to too much work in the paddy fields as most of my patients are farmers. An excess of Vata tends to lead to arthritis, which in the hot weather is made worse by an excess of Pitta. A number of other complaints are caused by the dust and pollen from work in the paddy fields.

When the paddies have been ploughed and planted, the patients have time to visit the clinic while the rice is growing and before the harvest begins. But the time between planting and harvesting is unfortunately not long enough for them to take the rest I prescribe with their treatments, so the best we can do is to stabilise their condition and try to maintain their dosha balance.

For the time being, all the Ayurveda medicine dispensed at the clinic is freshly made by Dr M. M. Chandrasena. Under his direction, we are now in the process of beginning the plantation of rare Ayurveda plants and herbs on the grounds surrounding the clinic. Many locally grown Ayurveda plants are fast disappearing due to deforestation and so have to be imported at great cost The clinic dispenses all medication and consultations free of charge - instead of payment, the villagers symbolically offer several betel leaves to me when I see them, as was the habit in the old days. Funding from the clinic comes from the Ayurveda treatments that guests to Ulpotha can choose to have during their stay, as well as from donations some of the guests have kindly